THE HODLER
All Currencies have a cost & indeed should have a cost. Banks and Gold require electricity, Fossil fuel & staff. Bartering has the hassle of converting cows to fractions of houses plus remembering who owes what to who and maybe having to forcefully remind them when they conveniently forget.
​   As an environmentalist, Bitcoins energy consumption & environmental impact is an issue close to my heart and as a Bitcoin miner & electrician I feel reasonably well qualified to guesstimate its energy consumption. I've found it uses way less energy than gold mining & banks but more importantly WAY less Green House Gasses !
Bitcoin power consumption​

Mitigating factors to be considered such as -

As you can see above - If Bitcoin replaces just banks and Gold, Green House Gases could be considerably reduced, then add in banking investments & a reduction in the Military things get really interesting !
It seems to me that Banks are "lending" a virtually infinite amount of money to launder / plunder the worlds resources in the guise of business to enrich themselves. Only Bitcoin can fix this.

Hash rate varies due to the following factors -

ASIC efficiency varies due to the following factors -
All makes and models of ASIC equipment have been listed (many thanks to "anonymous otter"). I added the estimated quantity of ASICs produced & multiplied it by the estimated up time the mines are in operation then matched it to the current total hash rate. This can then be used to approximate the average hash efficiency.
New mining gear will be driven hard, then sold when less profitable to amateurs, home miners, hobbyist & home / business heating. A brand new mine in an industrial mining unit would have much more up time say 98% than an amateur using a 5 year old ASIC for heating say 30%. Older machines may be deliberately retired with a sledgehammer. Selling cheap hash power to the competition could impact your bottom line.​

The difficult bit of these calculations is finding the networks entire average ASIC hash efficiency (J/TH) & more particularly finding how many of which model have been sold / are still in operation. Occasionally we get glimpses of sales in the 10-100s of thousands of units (Yellow highlight).

Where does Bitcoins energy go ?

Bitcoins power consumption serves three purposes      By 2028 over 98% coins will be mined and in circulation, by 2140 virtually all Bitcoin will be mined. Subsequent Halvening's coupled with Tech advances will make it much easier to simply buy rather than mine, the power consumption should drop as the block reward drops & the tech entry level increases. Miners will then be mostly hashing for increasing transaction fees + a increasingly tiny block reward, the "Gold Rush" will be over considerably reducing power consumption. Leaving the world with a much more slimline incorruptible economic backbone of world money.
No more bailouts ! The real cost of Banks. 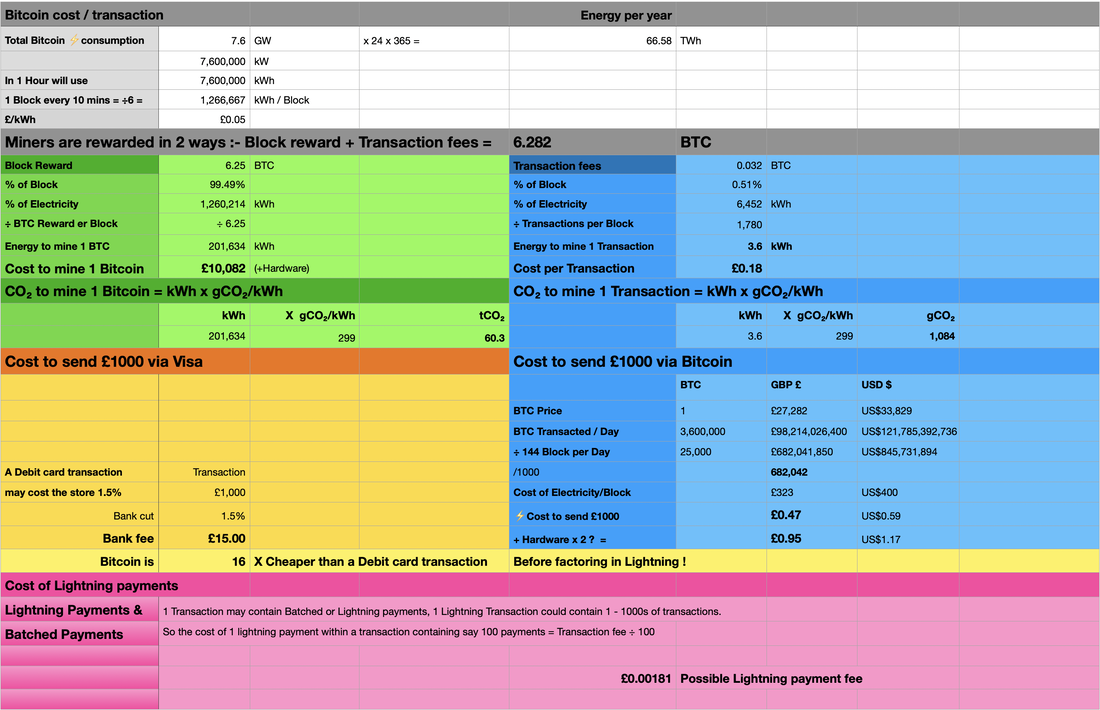 This simple changing of incentives could rewire the human psyche. People become incentivised by thrift rather than consumption. The benefit of de-growth to the climate cause could be immeasurable.

The closer you are to the money printing press the richer you are likely to be. Why is it that we can buy beans grown in Africa, picked - put in a plastic package - ship round the world, cheaper than growing in our own gardens in the US/UK ? Or minerals mined cheaper than in our own countries?
Simple

In the future Technological improvements will increase the hash rate, and not so much brute Wattage.
Roughly 40,000 tonnes of ASIC mining machines have been manufactured in total. Approximately half of that mass is still in use. If these replace heating units, much of this could be offset by not manufacturing boilers, storage heaters etc.

Second use of the heat

Heat is a by product of Bitcoin mining. The heat from 1 modern ASIC is typically 1.4 - 3.3kW & can be used to heat homes & businesses. Use Green electricity and you have a Zero emissions heater that makes MONEY ! Electricity is converted too heat, if its £50 heater or £7500 ASIC the result is the same. Currently Bitcoin consumption is capable and in many cases is - heating up to 3 Million homes & businesses

As the price rises will Bitcoins energy consumption rise ?
I think we may actually be at peak mining energy consumption for the following reasons.
In the early days the mining reward was much greater ( 50BTC ) so was worth the investment, but now if you are a company like Bitmain looking to invest in Research & Development to bring the next generation of ASIC to market, would you employ staff, buy machinery costing millions$ or simply buy & hold and go on holiday and make FAR MORE money?
​
I do not see a huge increase in mining energy consumption and quite possibly a reduction. ASIC mining gear is fetching highly inflated prices at the moment. Some people may actually sell there gear to invest in the coin its self. Hash rate may increase as old slow ASICs are replaced for new ones. Major innovations from Bitmain or anyone else seem a long way off at the moment.

If you really want to be green shut down -


Bitcoin could do that without a shot being fired, how green is that ?!

This survey by University Of Cambridge shows Bitcoin is powered by 39% renewables but rather confusingly talks about Bitmain Antminer S5 & S7 (2015 out of date mining hardware)
https://www.jbs.cam.ac.uk/faculty-research/centres/alternative-finance/publications/3rd-global-cryptoasset-benchmarking-study/